A Call from the Grave

The sea is in my family's blood, I was at sea for a few years and most of my uncles and grand uncles were seamen.

My youngest uncle, Brian, also a seaman who is retired now, had retrieved some heirlooms from his family home and amongst them were two letters dated 1889 & 1898 from Australia. The letters were about the death and burial of my great grand uncle.

My uncle Brian had showed me these letters a number of years ago and I used genealogical sites in Australia to try and trace the grave records without success.

The first letter was from the Captain of a merchant ship the SS Otway to my great great grand parents, the Cotters, informing them of their son (Maurice Cotter) death on the 1st July 1889 in Roebuck Australia due to an accident on the ship. He was buried by his shipmates and a headstone erected.

The second letter  was from a neighbour of the Cotters who was also at sea and had visited the grave in Broome  9  years later (1898) and wrote to a friend asking that he tell the Cotters that the grave showed, how much his shipmates had appreciated their son.

Nothing amazing about this story so far!!!

One hundred and  sixteen years ago my great grand uncle Maurice Cotter from Cobh (Queenstown) Co. Cork, Ireland joined a ship in England under the name John Snow. Apparently this was common practice at the time as you could not work for some shipping lines if you had already worked for a competitor, so people used different names.

During the trip, the ship (SS Otway) docked in Roebuck, Western Australia where Maurice died after falling into the cargo hold of a coal hulk "Fleetwing", that was alongside his ship while bunkering . Luckily one of his shipmate's knew his real name and informed the captain after his death, who searched his effects and found his parents address. If this had not happened the story would have ended here and nobody would have known what happened to Maurice Cotter. His shipmates clubbed together to pay for a headstone and Maurice was buried.

A letter was written home by the ships Captain

His grand nephew (Brian) discovered and kept the letter. Interest was renewed a couple of years ago due to my genealogy investigations.

Then one hundred and fifteen years later (1889 - 2004): a neigbour of my uncle Brian gives him a copy of the November National Geographic in Ireland, he reads an article about Australia, with photos by an American, one of those photos shows the grave headstone of Maurice Cotter almost accidentally in the foreground, to the only man in the world who could recognise it for what it was.

It was like a call from the grave, a coincidence through time itself

Photo; by kind permission of the Photographer - Randy Olson 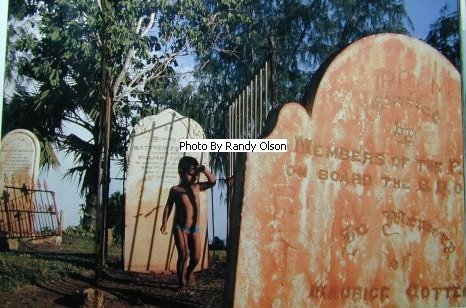 PDF: Document:  If you cannot open the link to the Cemetery, download this small PDF document reader from:  Foxit Reader Free!

More photos of the grave down below

On June the 30th he fell down the coal hulk Fleetwing at Roebuck bay western Australia and was taken up insensible in which state he laid in until 5.10am July 1st '89 when he expired. Everything possible was done for him to save his life, his skull was fractured and his neck was injured.

Onboard the Otway he was under the name of John Snow, so when you apply for his effects and balance of wages due to the shipping master you must apply for the effects of John Snow. His effects are but little would not pay for freight home. I will enclose a list. He was buried at Roebuck Bay and I am taking a head stone to place on his grave, which has been paid for by his shipmates. It is a token of the respect we can show towards him.

Trusting it will find you

1898: This is what the Neighbour's letter said:

I am sending a letter to Jack Gally by you. I hope you will offer it.

If you get home to Queenstown again, tell Maurice Cotter's relations that I prayed over his grave and that his friends out here did not forget Maurice when he was dead, as his grave shows, how they appreciated Maurice. You will get home before me I know. Remember me to everyone that knows me. Keep this letter Jim.

If anyone gets the opportunity of taking some photos of the grave I would appreciate a copy:  Joe Carr 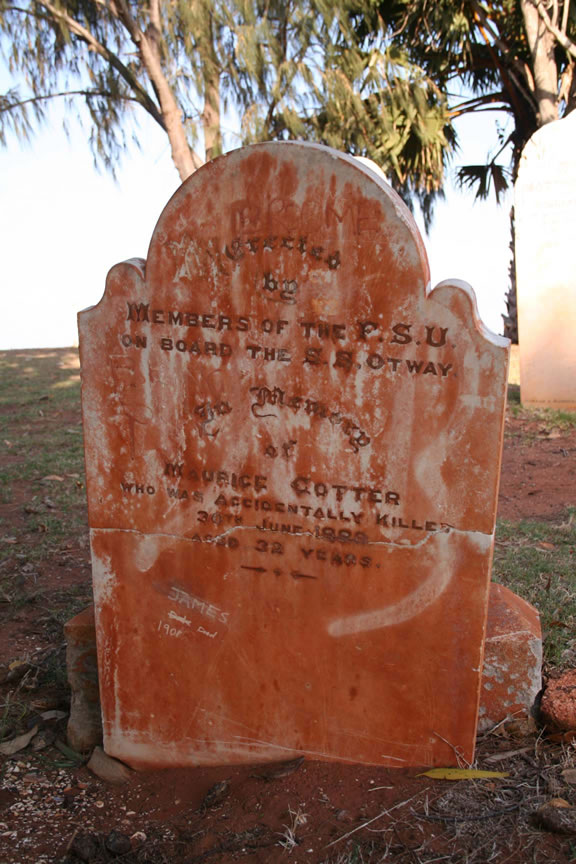 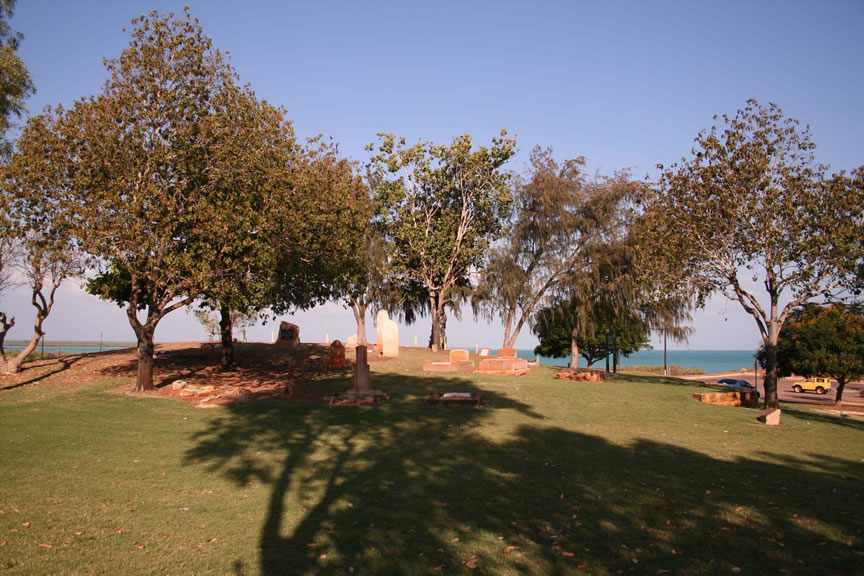 Christina Sprunt, the daughter of Yvonne Coate’s of "Lonely Grave" fame, who lives in Broome, kindly sent me some photos including the street sign honouring Maurice 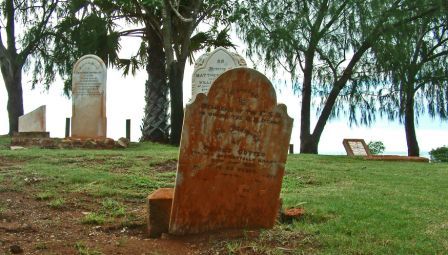 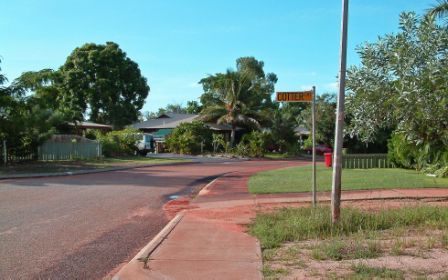 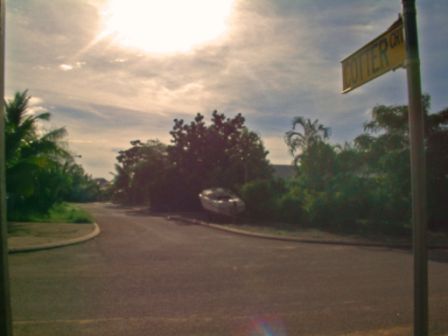 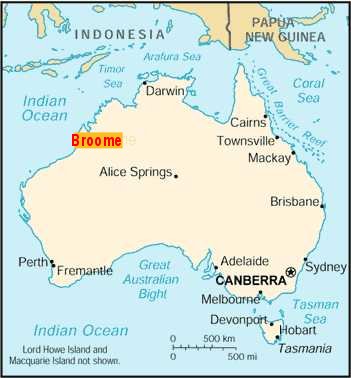 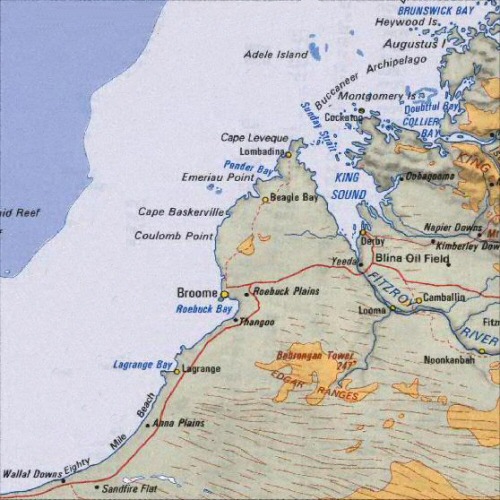 Just click on the thumbprint to enlarge, both sides of the headstone were used

They lived in Cobh (Queenstown) at 7 The Mall a grocery shop. Margaret, Joseph and family lived in the three story house above the shop. One of their son's, my grandfather Joseph married Kathleen Rohan and lived with their family over the shop, and to this day, one of their children my uncle William Carr (Aged 101 years) still operates the shop.